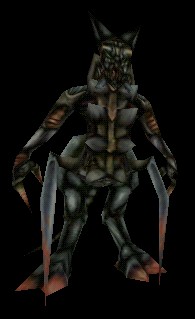 The Skaarj Queen is said to be the mother of her entire race. As such, she is kept heavily protected, despite the large number of natural defenses she already posesses. While modern Skaarj technology is capable of producing large numbers of eggs, the Queen's role as the primary source of new Skaarj offspring is still not overlooked.

In combat, the Queen attacks her target with waves of fast-moving orbs of energy, much like what Skaarj Warriors use. She also can attack up close with her claws and her pincers. The Queen also defends herself with a large energy shield. She will typically choose to advance on an enemy from behind this shield.

Most importantly, the Queen has the ability to teleport herself. She will typically teleport multiple times in a row and to multiple destinations, in an attempt to confuse a target who cannot tell if her current goal is to attack or to retreat.

ClawDamage, StabDamage
These values represent the amount of damage that the Queen's melee attacks do. ClawDamage refers to when she swipes at a target with her claws, and StabDamage is when she uses her pincers.
ScreamEvent
Sometimes, the Queen will stop in the middle of the battle just to scream. However, mappers can use this variable to make the Queen trigger an event every time she screams.

Also, the area where the Queen fights should contain QueenDests in strategic locations. Whenever the Queen teleports, she chooses a QueenDest somewhere in the map as her target destination. These are a subclass of NavigationPoint, which should be taken into account when that area of a map is pathed.