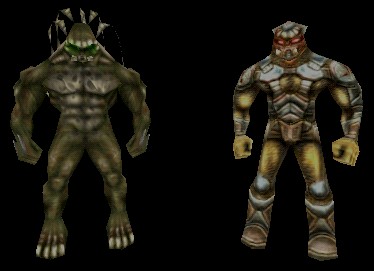 The Skaarj are the Unreal world's main enemies. They look like highly-evolved reptiles, but they reproduce more like insects, with offspring being born of a single Queen, and only certain male Troopers and Warlords being the only other Skaarj with any reproductive organs at all. (Culturally, this is one reason why the Skaarj put such a small emphasis on wearing any clothes; most of them have nothing to conceal.)

Since there are many different classes of both SkaarjWarriors and SkaarjTroopers, mappers shouldn't be afraid to put a healthy mixture of both types of Skaarj in their maps.

All Skaarj can be set up to perform one of two special actions if desired by the mapper.

In addition, all Skaarj are skilled in their own form of martial arts. In melee combat, they will attack with their fists or claws, perform a spin attack with both fists, and perhaps even lunge straight at their target (which is capable of knocking the target backwards a good distance if the attack is successful). The base amount of damage for these attacks can be set with the ClawDamage, SpinDamage, and LungeDamage variables in the properties of the Skaarj.

Skaarj Warriors are known for being more dangerous in melee combat than at a distance. The fact that they have prosthetic claws implanted directly into the backs of their hands means that their melee attacks will do significantly more damage than those of a Skaarj Trooper.

Skaarj Troopers represent the more tactical side of the Skaarj race. They are much less gung-ho in their combat technique than Skaarj Warriors, for example. Also, they are known for the fact that they come armed with exactly the same supply of weapons that a player would use.

The Skaarj Troopers all have a new variable in their properties called WeaponType. This variable is used to set the weapon the the Trooper comes armed with. Because it's a blank that can be filled with the name of any child class of "Weapon", then Skaarj Troopers can be armed with weapons other than those found in standard Unreal games. For example, I (the author of this page) have personally seen Skaarj Troopers with UT's weapons, and with the weapons that come with other mods, such as Legacy.

The addition of a weapon usable by the player means that the Troopers feel just a bit more like bots rather than actual monsters. However, it should be noted that Troopers still have the melee capabilities that make them Skaarj, even if they inflict less damage than those possessed by Skaarj Warriors.

Also, Skaarj Troopers possess shield emitters attached to their right wrists (the emitter is on a Trooper's right wrist because the majority of the Skaarj population is left-handed, and shields are typically handled by a fighter's off-hand). When this shield is deployed, the Trooper is invulnerable to all damage inflicted upon him from the direction in which the shield is deployed. He will still grunt from the impact of such attacks, and he is still subject to any momentum changes that occur from these attacks, but they will not successfully damage him. (However, he is still vulnerable if he is hit in the back while he has his shield deployed.)