UnrealEd 3, or UEd3 for short, is the map editor of Unreal Engine 2 games. Its actual name depends on the game it comes with, but even this is handled very inconsistently. For example the editor application of UT2003 and UT2004 is called "UT2003 Editor" and "UT2004 Editor" in the start menu shortcut, but "Unreal Level Editor" in the main window title bar.

The UnrealEd is a separate executable for Windows versions of Unreal Engine games, but is very tightly integrated into the game. This means it's not possible to use the UnrealEd.exe of one game with a different game, or even with a different patch level of the same game. Also, there is no UnrealEd for Linux, MacOS or console versions of Unreal Engine 2 games. 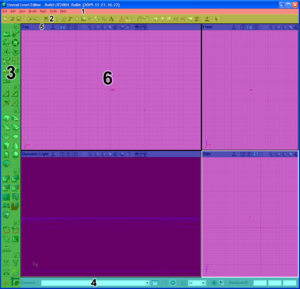 The following is an overview of the components of the UnrealEd 3 main window: