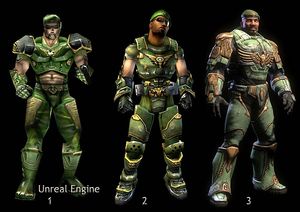 The second generation of the Unreal Engine powered games such as Unreal 2, UT2003, UT2004, Unreal Championship 1 and 2, XIII and others. Major new features not present in the original engine include hardware meshes (aka. StaticMeshes), fluid surfaces, terrain support, complex materials, particle emitters, volumes, and more.