Note: This tutorial applies mostly to Unreal Tournament. It is also very hard to do clearly so if you have any questions or corrections, please add them in as comments. I can now see why so few tuts on this subject exist :)

Discaimer: This is the way I animate and import weapons. There are approximately 1,000,345 different ways of doing it, with at least 1,000,000 of them being more efficient/better than mine. What I am passing on is what I learned by scouring the net for scant information on the subject and just basic trial and error. What I do know is that this way works :) To be honest I do things a bit more efficiently, but it is easier to explain it this way and let the person reading it come up with their own better ways of doing it after they are comfortable.

In this tutorial on making weapon models for Unreal Tournament using 3ds2unr, I'm assuming that you are comfortable with 3D Studio Max R3.1 or later. 2.X should be fine although you may find some features missing that I talk about (not sure). This tutorial will not explain the in's and out's of modeling and texturing your weapon, only the basics on how to animate it and export it correctly into Unreal Tournament.

Model Setup (note that this is for a weapon with one texture, I will explain multi-textured first person view weapon models later):

Vertex animation works like this: Each frame of animation is basically a copy of the mesh, just slightly different, like the little stick figure cartoons you used to draw in school on little pads of paper (you flip the pages and it animates). The .3d files (the file format vertex animation in UT uses) contains a model with these frames of animation and is basically X number of copies of the model super-imposed on one another with X being the number of frames.

In Max we use the Snapshot tool to make these super-imposed versions of our animated model. The product of this is what gets exported from Max as the .3ds file. The Snapshot tool asks what frames you want super-imposed (0-15 for example), the number of copies (in our example it would be 16 since 0-15 is 16 copies), and will do all the hard work for you. All this will be explained in detail below.

The beginning and ending of each animation (if the animation begins or ends with the weapon in view) needs to have the same exact postioning. For instance, a firing animation sequence starts, recoils back, and comes back to rest in the exact same postion (it's "rest" postion) it started in. If there is any difference, the gun will appear to jump around in view and look terrible. A good rule of thumb is to save a seperate copy of your .max file with a just a one frame animation of your weapon sitting in it's "rest" position. The exception to this rule are animations that start or end out of view such as a Select and Deselect animations which in these cases the weapon only needs to end in it's "rest" postion and start in it's "rest" postion, respectively.

Now we need an altfire animation. If your weapon has no alt-fire, skip this step. Pretty much just repeat the same process as above, saving the file as Alt_fire.max or whatever.

Now for the Deselect and Select animations which we will include in one file since both animations don't begin and end in the "rest" posistion. Open your rest postion .max file, move the slider to keyframe 10, hit the Animation button, and move/rotate your model out of view below. Turn off the animation button. Now select the first keyframe at 0, hold shift and clone/drag it to keyframe 20. Play the animation and it should go out of view and then come back into view, ending at it's "rest" postion. Save this file as Select_Deselect.max or something.

We now have the minimum amount of animations needed to get a weapon into UT. Actually we still need a 1 frame "Still" animation that's played when the weapon isn't doing anything but we can get that from any other animation's "rest" frame so it doesn't need it's own file.

Export your Fire/Alt-Fire and other Standard Animations. 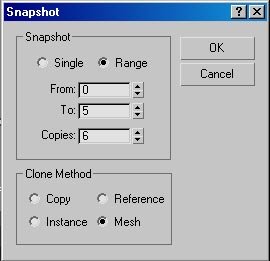 Exporting Your Select and Deselect Animations[edit] 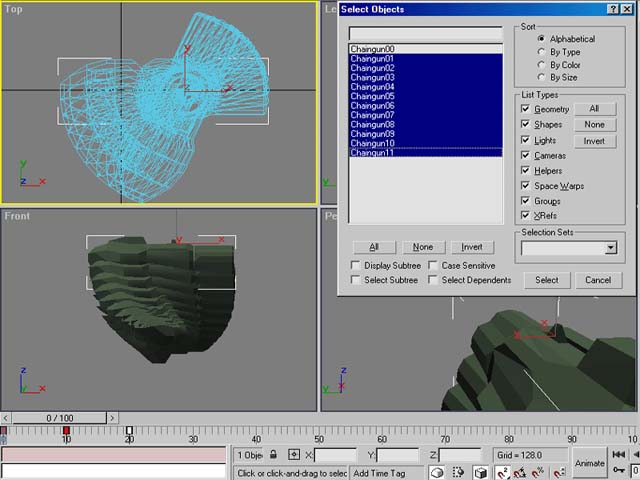 In UnrealScript, when an action that requires an animation is called, it gets the info from a function in the weapon's code. For instance, when a person presses the alt-fire on a Shockrifle, the code knows to play the animation "Fire2" since it's called in the Shockrifle code's alt-fire play animation function. Since every weapon has to have a Select and Deselect animation and they are never looped or anything funky like that, Epic saw fit to place those play animation functions in every weapon's parent class, TournamentWeapon, and they chose "Down" and "Select" as their animation names. So basically, if you name your Select and Deselect animations as "Select" and "Down", you don't have to write the play animation functions for them. If you must name them something else or want to change the rate at which the select or deselect animation (or both) is played, you can override the TournamentWeapon function in your weapon's code. This is starting to leave the scope of this tutorial so just make sure you name them "Down" and "Select".

You now need a one frame animations called "Still". There are a few ways to do this with the Snapshot tool (or without) but for simplicity we'll do it the same way we did the others. Open the Rest_Position.max file, go to Tools -> Snapshot, and enter 0 in From and 0 in To, make the number of Copies 1, and hit OK. Press H, select Something01, hit OK, go to Export Selected, and save it as Still.3ds.

Move your .3ds files that you exported into the same directory as your 3ds2unr.exe. On to Part2 3ds2unr

Unknown: On my hunt to correct spelling, this page came up in a search for modelling' but there is only modeling' in this page.