For those following along on the Assault Mapping Tutorial who want to build the tutorial map themselves (or are just curious how it was done), here are the steps needed to build our cozy little place I like to call "Tutorial Valley". After following these steps you should have something pretty close to the example map (which is also available for download. See the link from the main page of the tutorial).

Anyway, the steps are as follows:

Add an Actor>>Light>>Sunlight inside our space. Set the LightColor->Brightness to 80, and point it downwards at a slight angle. (You should now be able to rebuild the map and turn on Dynamic Lighting and see a nice peaceful, sunlit valley) 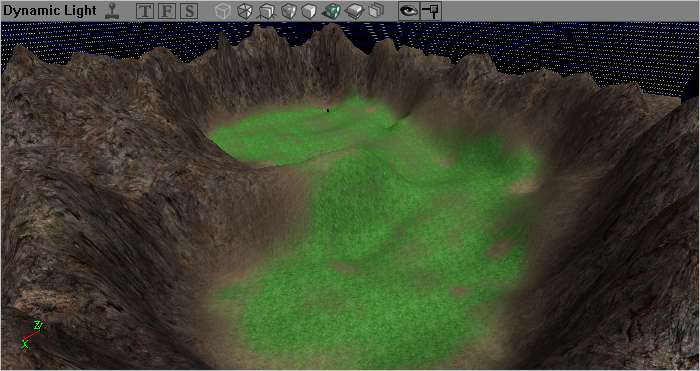 There's just one last touch left for the entrance to our base: An actual entrance to our base. We need to carve a hole in the back wall to lead into the rest of the underground base. Make the builder brush into a (h=288,w=256,b=512) box, and place it inside the back wall, centered with where we want the door to be (this should be just slightly bigger than the mesh we've got for our doorframe), then hit the subtract button, and presto, we have a hole. But now we've got another problem: the hole is covered by terrain. To fix this, go into Terrain Mode and select the "Visibility" tool. Set the inner and outer radius down to 1, and (very carefully) control-click the particular terrain cells which are blocking the passage. (we will want to actually build the rest of the base later, but for now we'll stop here) 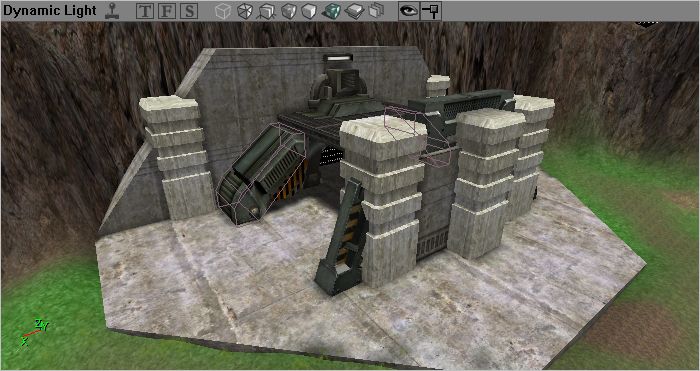 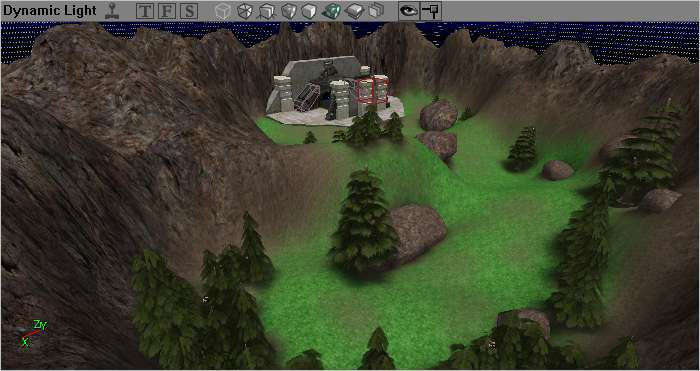 There we have it, a nice peaceful sunlit little valley full of green grass and happy birds, ready to be drenched in blood!

Now might be a good time to add a temporary PlayerStart, fire up the map in the game, and have a nice leisurely stroll about your new world (make sure all the terrain's navigable, looks and sounds right in-game, etc.) Then, on to the real fun...

(There are a couple of touches which could still be added. Our skybox could use a bit of work, for example, by adding some clouds and a sun with a corona, and possibly some continuation of the terrain into the distance so it looks better if somebody goes up high enough in flying camera mode (alternately, we might just want to bring the ceiling down low enough that they can't do this). Realistically, some blocking volumes should also be erected around the sides of the valley to make sure people don't find a way up onto the peaks where they're not supposed to be (which could potentially screw up the planned assault balance), and we could probably make the base look a bit better with some more carefully chosen meshes, or some custom building, but we'll leave these details for the time being)

This tutorial was originally written and contributed to the Wiki community by Foogod. Questions and comments are welcome! Please either leave them on my personal page or at the bottom of the relevant tutorial page. If you see something which is wrong or unclear and you think needs some correction, please feel free to edit the text directly (that's what the Wiki is for!), but please try to keep the tutorial flow intact (no thread discussions in the middle of the tutorial text, please).

Note: To reduce clutter, comments on the tutorial pages will be periodically moved to the Legacy:Assault Mapping Tutorial/Discussion page. Look there for older comments and thread discussions.

Stino: Maybe the grass is a little to green :d

Hoyr: There is a couple of good grass textures in the ArenaTex package :)