The mesh I wanted to make would use both of these textures, namely it was a steam vent which would eventually have steam pouring from the top of a mound.

I fired up 3DS Max, and roughly modeled what looked like a vent, I started with a plane, broken into a 6x6 grid that measured 256x256 generic units, converted to editable poly, and then started moving the vertices to where I wanted them. Tip: to view the divisions between the grid in 3DS Max press F4

I came up with what is shown in Tile #01

After this, I added a HSDS modifier and selected the inner region, I'll note now, that I wanted the outside square to remain square, and with a 0 altitude on the z axis, this would make it easier to place when I got into the game, I also went to the lengths to ensure that the center vertex was exactly 256 units high, the ones on the north/east/south/west of it I made 128 units high (kind of like a + shape of vertices were selected and then I moved them to the apropriate height), and the ones on the NE/NW/SE/SW (the x shape of the center) I made 48 units, then I shifted them all in the x-y plane, while keeping the outside vertices in their original location!

I selected the inner region as shown in Tile #02

On the right hand side in the roll out, I then clicked the subdivide button, which smooths the image a lot, this is good, becuase it is supposed to be a steam vent, not a sharp spike in the ground, my next task was to drop the center vertice (the one that was at 256 height in the Z axis, which you may note is no longer this height) down to the ground, ie a zero on the z axis to produce the center of the steam vent.

I could have aditionally tweaked the vertices, but didn't because I was a little worried about loosing the smooth effect.

After this I selected a different set of polygons as shown in Tile #03, and subdivided again.

And one more time with yet another different set of polys, as shown in Tile #04.

Everything seemed to be going great, I wanted one more level of subdividing, but thought I would manipulate some vertices a bit more at this point, looking at the top of the steam vent I thought it was looking pretty flat, and wanted to put some altitude variation into that, after this I selected the polys shown in Tile #05 and did a final subdivide.

At this point I noticed that the corners of my square had moved in due to the HSDS smoothing modifier, I quickly moved them back to their corners at the proper 128,128 -128,128 128,-128 -128,128 positions, making sure the outside shape remained a perfect square.

I was happy with model, and later did others to produce varience in game.

The task of skinning came next, I chose to use the vertex paint method for a smooth transition from soil to mud, I thought a bit that the terrain itself would, atleast where these vents were, be a mix of mud and other textures anyhow, and that not a spec of solid soil should be seen, I added the vertexpaint modifier.

A new panel pops up, at its top are a few images of cubes, I picked the shaded representation of the vertex colors(the second cube on my version). They can be seen in Tile #06

A little bit below this, there are 6 more buttons, 3 wide ones on the right, and 3 thin ones on the left, the tooltip reads paint on the top right one, and erase below that, and finally the color picker below that, I chose to use a black, not sure why, it just seemed like the logical choice, we are after all effectivly painting an alpha channel that determines the transparency between our two textures here. These buttons can be seen in Tile #06.

I paint my pattern onto the mesh, merging the two appropriatly to make a smooth transition form the soil ground to the muddy slope and top, I end up with something looking the mesh shown in Tile #06

I'm not sure if the next step is actually required, since we are only going to be assigning one material to the mesh, but I'll quickly go through the process anyhow.

In the 3DS Max material editor, found in the top toolbar, designated by 4 spheres coloured red, green, blue and white, select the first material, then click the button that has the label Standard and change it to Multi/Sub Object, it will ask you if you want to discard or keep the material that used to be in slot you have changed, since you need to be taught this, I assume you are new to 3DS Max, and I will recomend you discard, but leave the choice for yourself.

The interface changes dramitcally, click the button labeled Set Number and set it too 1, because we will only be using one material, which will actually be a mix of two textures ;)

Down the bottom of the interface the long list of textures should shrink to contain only the one, click the button which should be labeled something like Material #xx ( Standard ), then change the drop down from Blinn to Phong at the top, UT3 uses phong. and then in the tiny little square button next to the Diffuse color swatch in the Basic Parameters, and select Mix.

Where it say color #1, go to the button labeled none, click it, select bitmap, and then load the soil texture (note the color in the swatch is black, it will replace the black sections we just painted), and then do the same for color #2 except load the mud texture, which should replace the white section of the mesh.

The third one in the list is called Mix Amount, this is the map which determines the pattern of the two textures, you could use perlin noise for an unpredictable response, but what we want here is the vector color, if you click the square button, you should see Vertex Color about 3rd from the bottom, select it, and we are almost done, climb back out of the mix, to the top texture in the drop down list, and then apply it to the object (by selecting the object and clicking the third button directly below the texture sphere swatches), you won't see the texture in the viewport, but it should be there when we render.

There is one last thing to do, and that is add an edit poly modifier, select the border of the square from underneath, and cap it with the cap button in the roll out. If you see textures fighting after having done this, don't feel to worried, the fact that it will be placed slightly below ground level will totally cover this problem up when we place them in the editor.

I was modestly happy with it, there was room for improvement, and I could take that up with my next few variants, but this was satisfactory for what I wanted.

Now I needed to import it into the game... 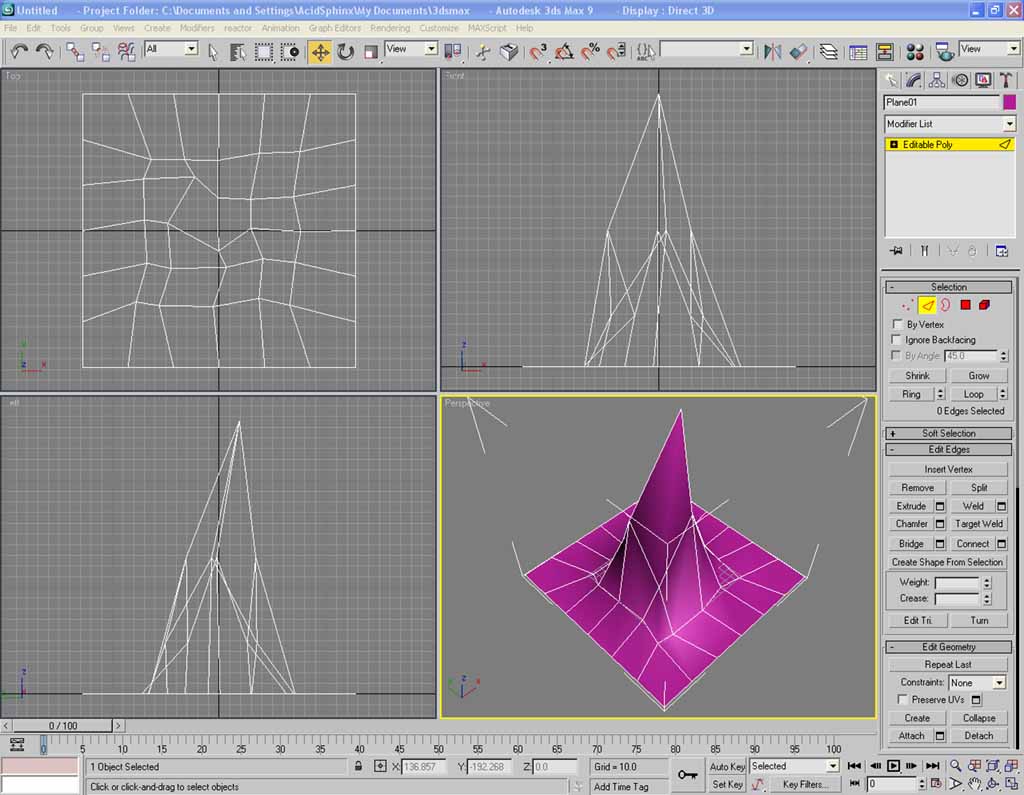 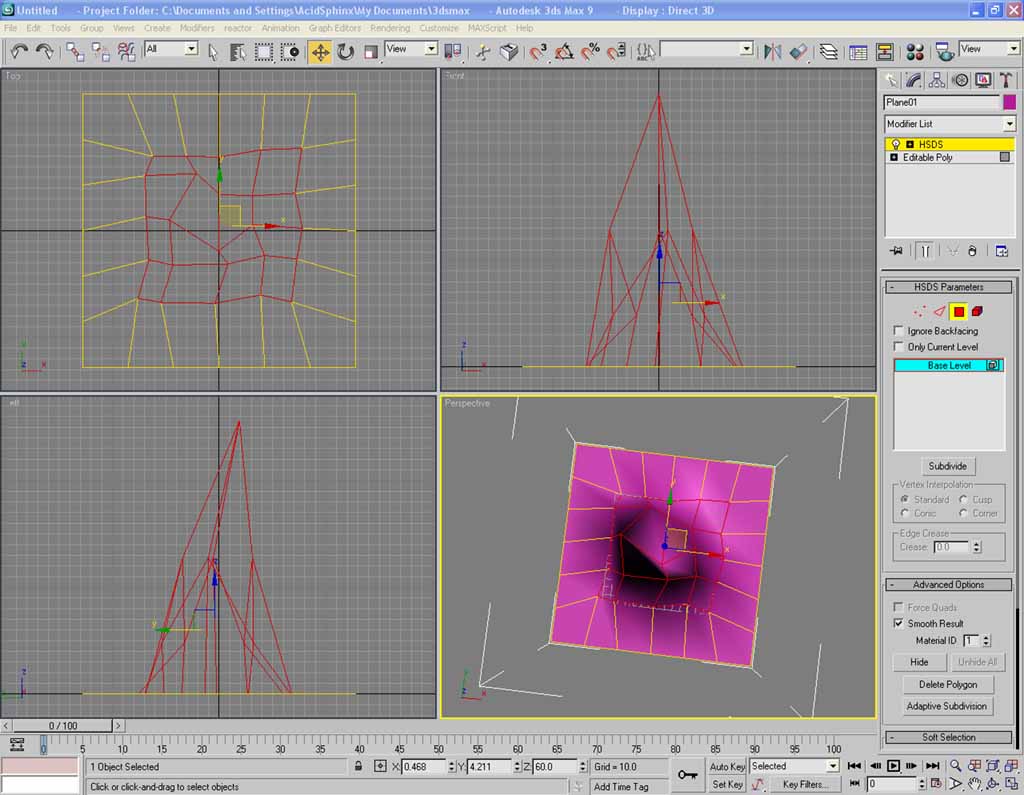 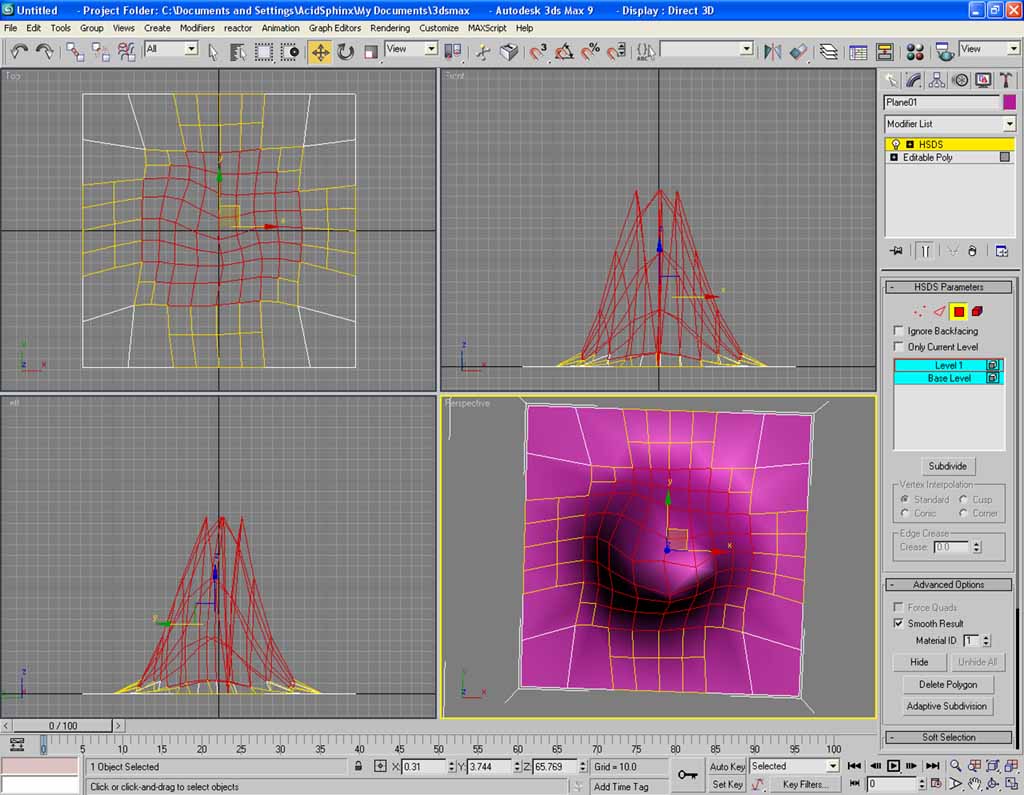 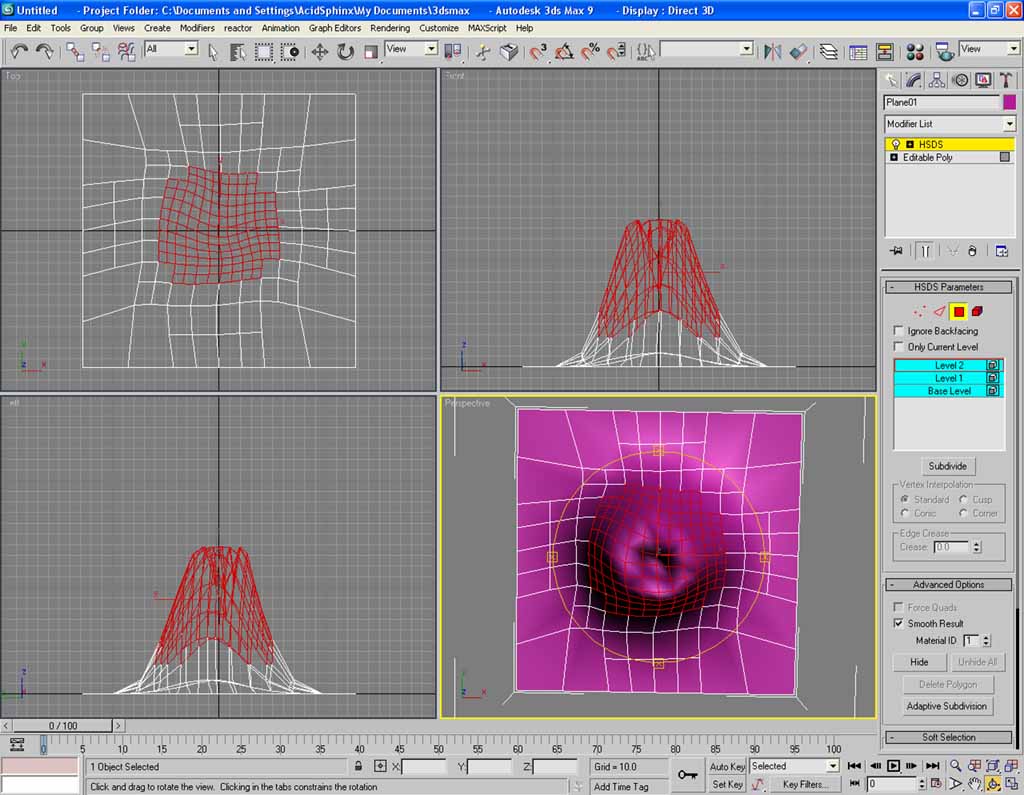 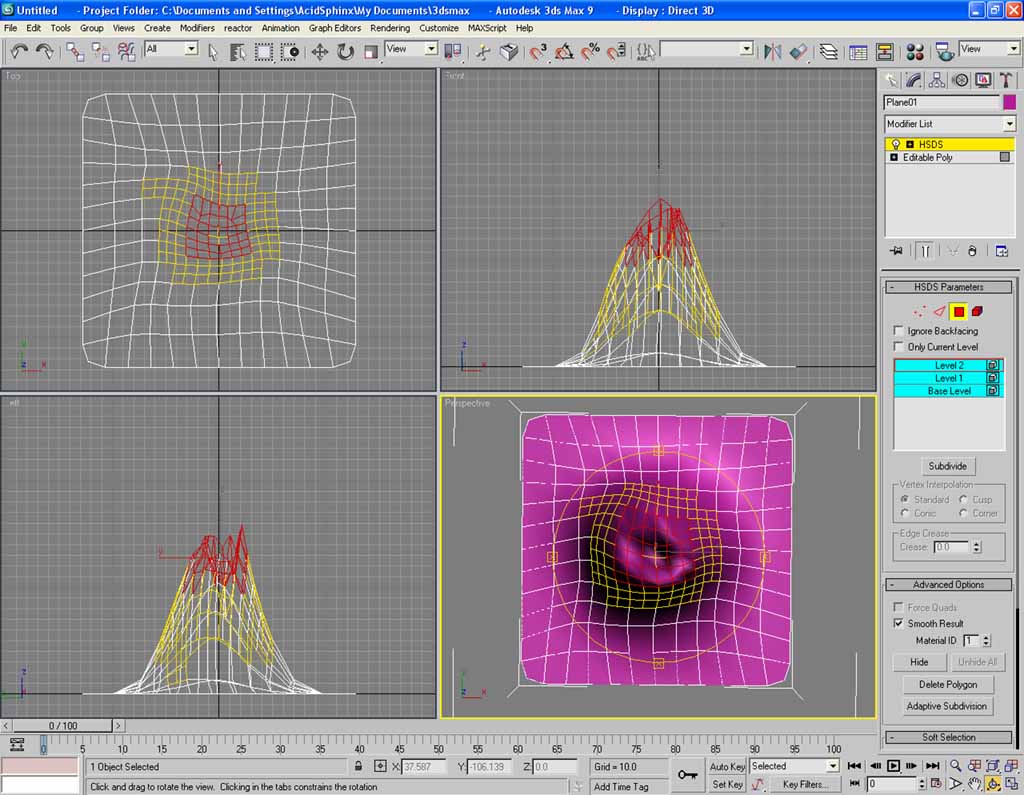 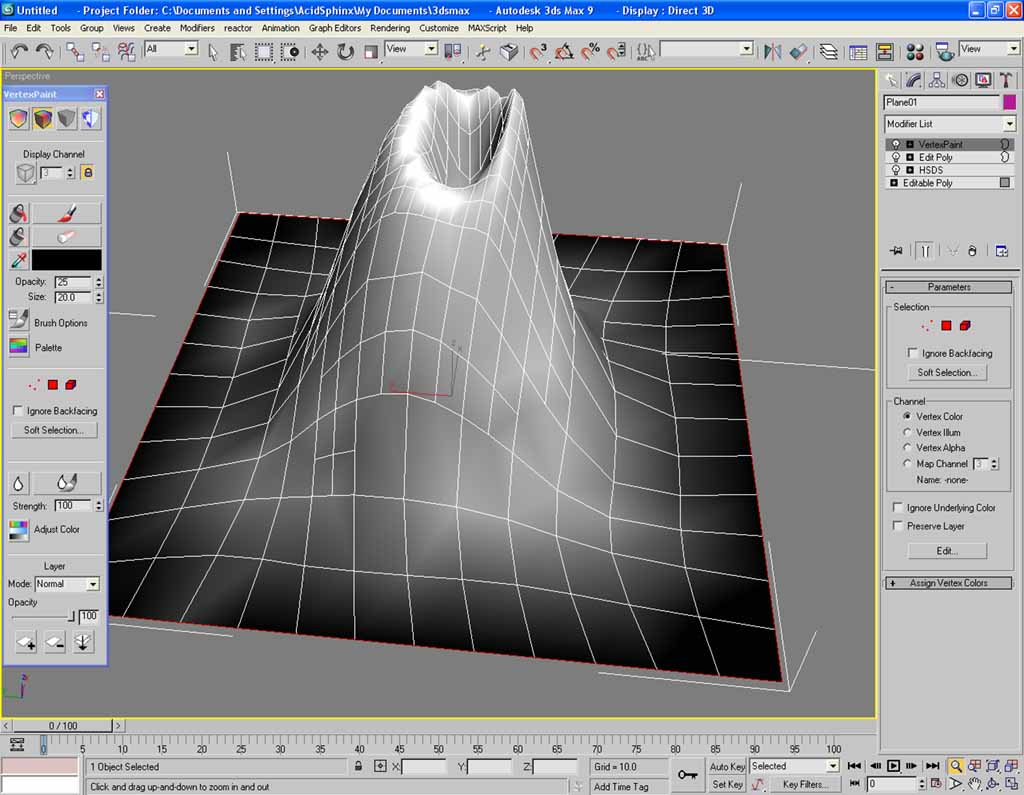 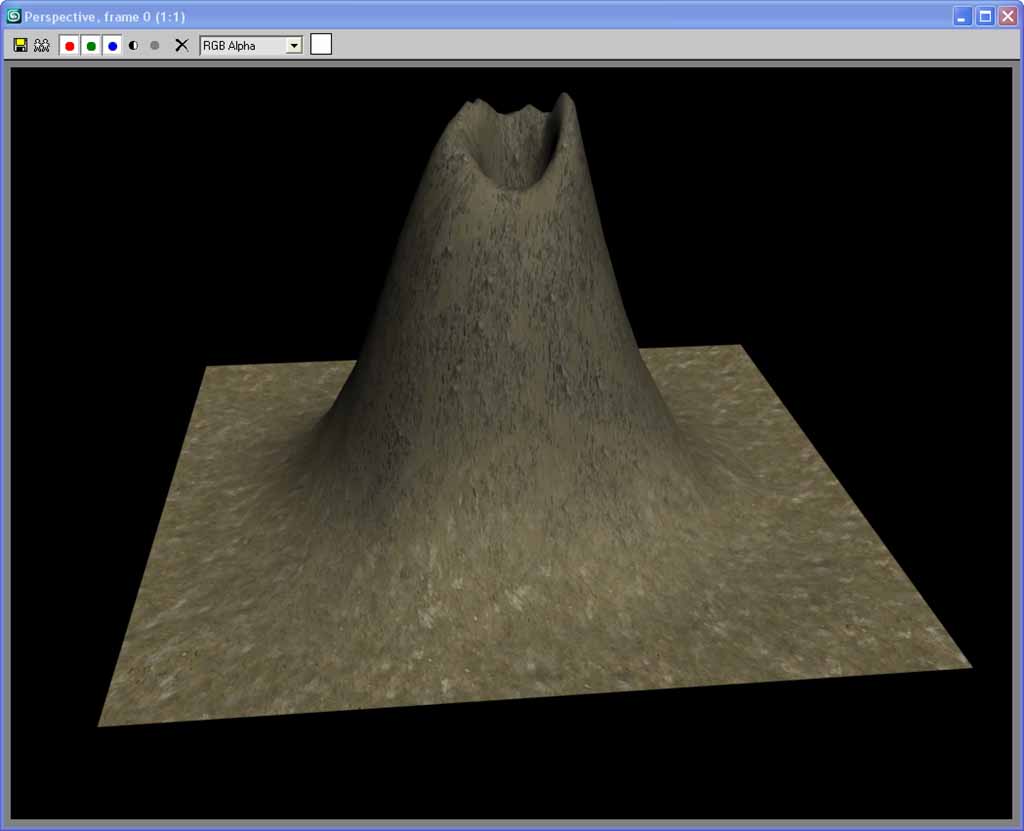