Should work with most gametypes/mutators - RuneUT is a mutator just like any other.

My first UWindow thing. Borrows heavily from the Mutator screen and the Weapons screen. (Hey, they have already written code that does exactly what I want, why write it again?) 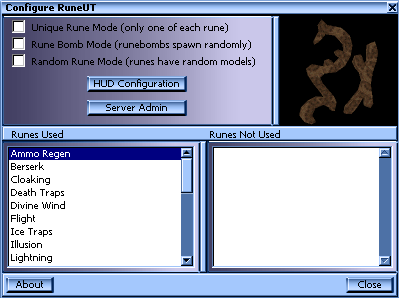 Below is a list of basically finished, (mostly) working runes in the mod's current state, with a brief description of each. Some runes may seem familiar to those who have played the original Rune Quake or Rune Quake III.