Trilinear texture filtering is a technique used when applying different Wikipedia:mipmap levels to a surface in a 3d world. When Bilinear Filtering is used, this only filters within each mip level itself, not between them, as shown in the following image: 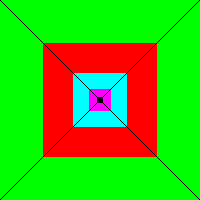 This effect becomes vicious when the viewpoint moves, as these lines remain a fixed distance away from the viewpoint - they appear to "move" as you move.

The solution? Simly apply a linear filter between the mip levels after they have been applied, and you have trilinear filtering. The lines are gone, as now the mips blend smoothly together: 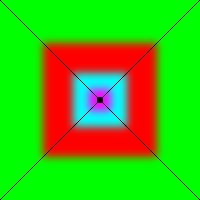 Draconx: The images suck I know... just created them in a few seconds with photoshop. Hopefully they make enough sense.

Tarquin: I wonder whether it might be better to create articles on Wikipedia for concepts that aren't specific to the Unreal Engine? See Wikipedia:Trilinear filtering – perhaps you'd like to incorporate your material into that article and upload your images there? We can easily link to Wikipedia with Interwiki links, and you'd get a wider audience :) The pictures seem pretty clear to me, by the way, though the black lines confused me, since it's not those that are the problem. Even better would be a screenshots from a 3d game that's open source (for the purposes of Wikipedia)

Draconx: True. I was just adding some content for pages that I saw links to but didnt exist yet. Wikipedia already has most if not all of the stuff I talked about (except the images). And those black lines on the images are *supposed* to make it look kinda eye-of-the-beholder style 1st person... but they probably fail.

Tarquin: Actually, I see what you mean – without those black lines, it would look 2-dimensional, like some concentric squares.

Switch`: The firstcoloredmip <param> console command will render each mipmap with it's own color. To enable use non-negative number as param, to disable use the command alone. It may not work in OpenGL.