Anti portals are special occlusion shapes in Unreal Engine 2 that help optimizing the performance of a level. 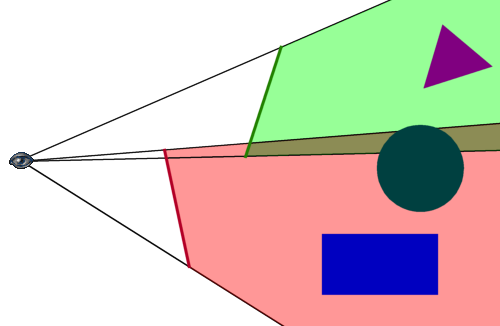 For the renderer the triangle and the rectangle are occluded, i.e. not considered for rendering. The circle, however, is not covered by any individual anti portal and thus does not get occluded. Keep this behavior in mind when deciding where to place anti portals.

Don't use them right away
Apply other optimization techniques first. Make sure you properly divide your map into zones and use "cheaper" level optimization techniques like bLonelyZone, ManualExcludes, CullDistance and ForcedVisibilityZoneTag first before using anti portals.
Use as few as possible
The engine needs to check every visible actor against all anti portals in the level. At a certain point adding more anti portals starts to hurt more than it helps.
Make them as big as possible
Remember, only if the entire actor or surface is covered by an anti portal, it will really be excluded from rendering. Thus anti portals should be as big as possible to fill out as much of the object that blocks the view.
Keep the shape simple
Again, there's a performance trade-of here. If a slightly more complex anti portal helps occluding more actors, then it may be fine. However, when it gets too complex, it takes too much time to check the occlusion.

Every surface of a brush can be flagged as an anti portal using the surface properties window. When doing this, the entire surface in its original shape acts as an anti portal sheet. The surface should be a convex polygon and will always be used in its unaltered form. Any holes created by other subtracted brushes will be ignored for the anti portal shape and may cause HOM effects!

Anti portal surfaces only have an effect in the zone they belong to.

For anti portals that aren't just sheets, an AntiPortalActor(U2, U2XMP, UE2Runtime, UT2003, UT2004) must be used. It is created in a similar way as volumes or brushes, but must be convex (no holes and not "dented" in any way) and is added through the Add Antiportal button.

An AntiPortalActor is displayed as a brown (or bright orange if selected) volume in the editor. In real-time preview mode and in the game the AntiPortalActor itself is invisible and can only be noticed as it occludes actors and BSP surfaces it covers. While you should try to fill out an static mesh or terrain shape as closely as possible, make sure the anti portal does not stick out of the static mesh, as it may cause HOM effects.