I love the smell of UnrealEd crashing in the morning. – tarquin

This page is both:

The Unreal Engine thinks of the entire Unreal world as solid matter when you start a new map. Once you have subtracted a space you may want to add a small piece back in. This is called adding, because we tell UnrealEd to add a chunk of "solid" material to a subtracted space.

You can not add solid geometry into your Map unless you first place it into a Subtracted Space. Only relevant in older versions of Unrealed, 1,2,3.

To create a block in your level:

The UnrealEd Interface has a set of buttons running down the left side of the screen. This is called the toolbox and is divided into several groups. In the 3rd group of buttons, find the top-left button of that group is a blue-green cube. (In UnrealEd 2 and later, each group can be collapsed, but normally this group is visible.) Right-click the cube button. 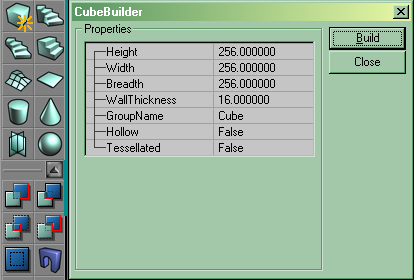 You should not make additive brushes go outside the area which you subtracted.

You should not make additive brushes overlap each other.

These above can cause undesired results in you map I would strongly recommend against it. (see BSP Hole)

To save yourself some hastles when you are getting started I suggest using Snap To Grid.

Foxpaw: Why shouldn't additive brushes overlap each other?

OlympusMons: Im not entirely sure I thought it caused holes in the map. I figured it would be safe if beginners started simple. If im wrong in anyway please change it.

OlympusMons: Touch it up alittle and made it alittle easier to read as well as some more intermediate suggestions. Wow I never thought this page was going to be useful but now it seems it will be a starting point in Unrealed 4 is it? Are there any ideas on what formats we might be going for with the new engine? I would perhaps suggest pre-fixs or something to comments/procedures only related to certain engine versions.#

Tarquin: What's going to be different in UEd 4?

OlympusMons: From what Ive been reading on utforums etc, it seems you can goto file/new and you get to selecti either additive or subtractive methods. It defaults to additive now by all accounts and you can create adds to the void without having to worry about anything. So a basic procedure Creating a room would combine both Subtract a Space and Adding a Block. If your in Subtractive mode then nothing has changed but as I said before you must go file/new first then select it, apparently it just fills the void with a big additive anyways.