I will try to add as much as possible to this page in order to help anyone who'd find it interesting, hopefully the mapping community will find it useful. I hope this will help mappers making more realistic maps, even the unrealistic ones. What I mean by that is that in order for things to look and feel good, things have to be somewhat done according to the real world with logic principles baked into them. Of course, this is not something you can always follow, but for example, if one stone in an arch collapses, a lot more will fall down with it. Also, I hope this will be useful for creating alien architecture and creating a culture which makes the map feel more involving.

A lot of what will be listed here is the way you produce a great movie, in example, Star Wars or Lord of the Rings. Although the later might not be completely the work of the movie people, the costumes, weapons, settings and so on was only described and sometimes illustrated. Although you'll always need a solid base for a map, it's the details that makes your world come to life. Also, this page will remind you that a lot of what's already in the world would make perfect maps, or part of perfect maps. In example, we have gothic, incan, roman, medieval architecture, not to mention the wonderful natural features such as huge caves, oddly shaped cliffs, valleys carved out of the mountain by water and so on. Let's begin.

What does/did the people who built it belive in?

The first part we should have a look at is culture. Culture is based on the people, who, in turn, are based upon natural conditions. Where there's much rain, you'll usually have a God for rain and one for sun. There's usually some God of fertility in all ancient religions, or at least some form of symbol. In more modern communities, such as christian, muslim and jewish along with the other one-God religions, you are more likely to find perhaps a saint or a special place such as an altar or a church. This is why you should make up a basic idea of how the people who shaped the landscape/built the site thought. Of course, you can use an already existing idea of how things work, such as the Nali (inca/buddist cross) or the Liandri Corp (cost-efficient and very low security, dirty - unless you're making their designed arenas or where higher-ranking people lives).

To say it simple, this is where you pick who would live there.

The culture also makes a change on if there are symbols and what they mean. Modern style maps should probably contain warnings or commercial ads on the walls, while an inca-inspired temple would probably have some pictures of Gods and some inscriptions. A good idea is to detirmine then what these Gods look like or what they represent, or what corps or companies would put up commercials in that spot. DOM-Condemned (UT) is a good example of this, Arturo's grafitti on the walls, old torn ads and so on. You wouldn't find commercial ads for "Fat Albert's stripping bimbos - free weed every other hour" next to a big corp's central office, would you?

Does your people have any special symbols typical for them/usual among them. Any Gods perhaps? 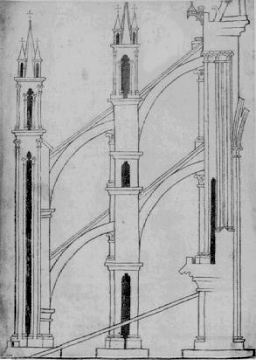 What fits your population and era?

This is something VERY important. You pick a style of architechture and stick to it. Maybe you can combine a few types, making the location look like it's been used for several centuries. This would be a good idea for any mappers making "realistic maps" based in southern Europe, as you're likely to find houses from the 20th century with the foundations dating 2000 BC. This is also part of culture - How does your population treat ruins? Will they preserve them by not doing anything to them or will they have built new houses on top of the old houses?

Pick your style/era(s) and go to www.google.com. Do a picture search for what you don't know, in example, how doorways look. Are fancy decorations common? Is the top of it curved, flat, flat with an arch above etc. You've now got the base for how you could do it. Of course, if you're doing something which isn't supposed to look real you wont have to worry about sticking to what you've found, however you still should decide on one or a few styles BEFORE starting the map. A lot of potentially great maps looks like something you could make with coloured paper shreds.

So, how did they build it? And with what tools and materials? A ruined brickwall and a claywall doesn't collapse in the same way, for example. Look at the architecture you've picked and think of what materials your population might have access to and how advanced their tools are. Also, look carefully at how things were done, in example how the bricks in a wall are placed or what's under the floor. A classic thing to do when creating ruined stuff is to make things more 3D than they have to be. In example, a floortile missing or a few bricks. This is not realistic most of the time, but it's a nice effect which breaks the Wolfenstein 3D feeling.

Anything that can/have collapsed and fallen down should be looked at a bit extra. In example, what happens when one rock is removed from an arch+ how many of the other rocks stays? Same goes for rooves, what holds them up? Far too often they seem unaffected by gravity. Straw rooves which are kept in position by themselves, tiles flying, or perhaps just too heavy for the walls to bear.