The arena is a perfect place to implement that risk balance stuff I was talking about earlier. In fact, take a look at any of my levels and you will find that the arena will have some kind of life-threatening decision to make. 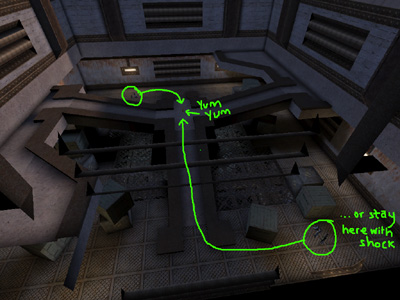 Usually I make my arena's based on one simple decision and that is enough – the players are only going to spend a little while in here, it doesn't need to be a whole deathmatch level in itself (even though DavidM's JB-Nifam (UTJB) and my JB-DarkAges (UTJB) arenas are actually released Deathmatch maps – we were just lazy!). Anyway, at least make sure you have an arena – a JB map without an arena is unheard of these days.