This article discusses how to path translocators for the original Unreal Tournament. To do this in UT200x, just use a JumpSpot. As discussed on the JumpSpot page, the bots in UT200x are smart enough to use the translocator to get to a JumpSpot when necessary.

Pathnoding translocators is very similar to Pathing Lifts. To set up a place for bots to use their translocators, you need to place three actors:

The screenshot below shows an example of this from my map CTF-Susurrous. 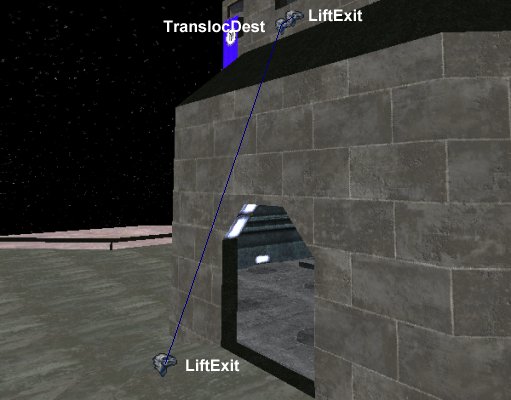 When you set up a translocator path like this, a bot using it will assume that he can walk from the TranslocDest to either of the LiftExits. And in the case shown in the image above, it's true. A bot needs the translocator to get from ground level up to that high ledge, but if he wants to get from the ledge back down to the ground, he can just walk or jump off the side.

However, this won't always be the case in your maps. For example, if you want a bot to use his translocator to cross a wide gap, he won't be able to walk from the TranslocDest back to the original LiftExit. In cases like this, you replace the first LiftExit with a TranslocStart, which is a subclass of LiftExit that indicates to the bot that he must use his translocator in both directions. Here's an example from the same map that shows this: 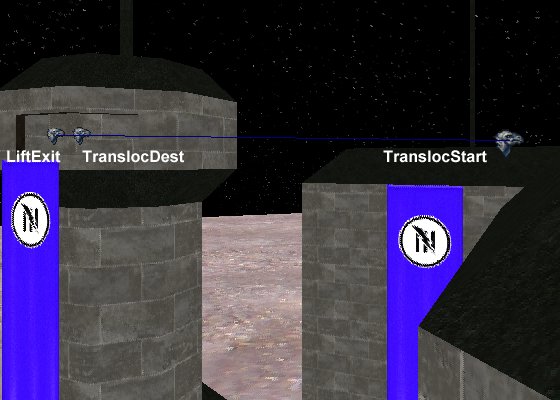 There may also come a time when you want a translocator path that can only be followed in one direction; in other words, the bot can't get back to the original LiftExit or TranslocStart at all. For example, you might want to have bots use their translocators to get down from a very high altitude. The usual way to make a path one-way is as follows:

This works fine for other types of nodes, but I've had some trouble getting it to work with LiftExits and TranslocDests. An alternate solution is to place the TranslocDest such that a bot can't walk to it; that way he'll ignore it and find another path. The screenshot below shows an example from my map. 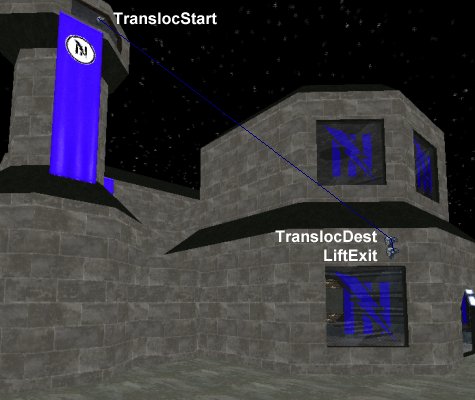 Here I needed a way for a bot to escape the sniper tower and move directly towards the center of the map, without needing to take the longer route through the teleporter I've got up there, so I created a translocator path from the sniper tower to the ground. However, even with all three nodes set as one-way paths, I still noticed the bots trying to reach the sniper tower directly from the ground, and it's much too high for that to be possible. Thus, I raised the TranslocDest and LiftExit above the ground a little so bots couldn't walk to it, but not so high that bots would take damage falling from it. After doing so, they used the path without any problems.

One more thing you should be aware of: if you set your translocator points in such a way that translocation is not possible, for example if the TranslocDest is ridiculously high off the ground, the bots will try to use it anyway, so make sure you test these things out. One problem I've encountered is that bots often seem to mess up if you try to give them a path that's too close to being vertical. Below is a screenshot where I wanted bots to translocate from one bridge up to another. 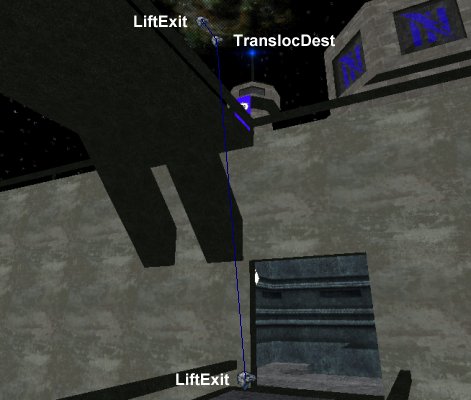 Now, it's kind of a tricky translocation as the bridges' heights are relatively far apart, so I thought, "Well, the closer to vertical you throw a translocator, the more height you'll get out of it." Right? That makes sense to you and me, but apparently bots don't agree. In the configuration you see above, my bots would throw the translocator, and it would hit the side of the bridge and bounce off. Then the bot would translocate up into midair, fall back down, and try again ad infinitum. It was amusing to watch for awhile, but it's not something you want in the final version of your map. I found that if I backed the bottom LiftExit up a bit, so the path's angle above the horizon was not quite so great, they were able to use the path with ease. A human player might find it difficult to fire the translocator exactly right from that position, but the bots will get it every time.

SuperApe: This page appears out of date. The UT200x method of getting bots to aim appropriately with the translocator is with a JumpSpot, not a LiftExit. Another method uses a LookTarget. I'm referring directly to Blitz's Advanced Bot Pathing Tutorial.

SuperApe: Well, the (UT)/(UT200x) notation is really more for class pages. I think since this is just a "how to" page, perhaps this page could just be divided into two sections. (*waves at Ironblayde*) :)

Birelli: I wrote up how to path UT2004 translocators from Steve Polge's article on JumpSpot, a simple note at the top of this saying "This is for UT, for pathing translocators in UT2004 just use a JumpSpot"...I'm going to put that in.

Category:Legacy To Do – Update for UT200x with the comments made above in Discussion.