The map editor for Unreal Engine 3 games is actually named after the game it belongs to, for example "Unreal Tournament 3 Editor". For historic reasons, most mappers refer to the map editor as "UnrealEd" or "UEd" for short. Sometimes it is even referred to as "UnrealEd 4" to point out its historical relation to earlier UnrealEd versions, but the version number has actually been dropped from the editor's name.

Note that shortening it to "UE" may cause confusions because that's the abbreviation for Unreal Engine. Also, UnrealEd 3 actually is the map editor for Unreal Engine 2 games like UT2003 and UT2004, not for UT3. If the context is obvious and you're a lazy typer, just use "UEd", otherwise something like "UT3Ed" or "GOWEd" should clearly get your point across.

The UnrealEd is not a separate application, but actually launched through the same executable file as the game itself, just with the additional parameter editor, for example: 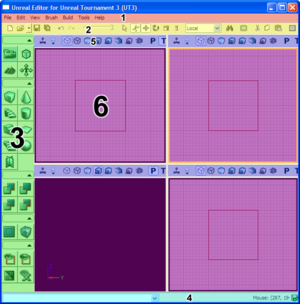 The following is an overview of the components of the Unreal Editor main window: