Matinee is a tool in UT200x which allows complex camera scenes to be scripted: level fly by, scripted sequences, cinematics etc.

There are these possible actions:

There are these possible subactions:

Open your level. Click the "Matinee" button in the toolbox (next to the Terrain Editing one). You'll get a new window and here is where it will all happen ;)

While in the "Scene"-tab, click "Add new Scene". The list below will now show a scene. Select the newly created scene by clicking on that scene in the list box.

Once your Interpolation Points are in the level, you need to go to the "Actions" tab. Click "Add New Action" and you'll be given a choice between ActionPause and ActionMoveCamera. Choose ActionMoveCamera and an Action should be added to the list. If not then make sure that the scene is selected (in the Scenes-tab). Select the newly created Action. Open the "MatAction"-subsection of its properties. Now you need to select the first Interpolation Point of your scene in a 2D-view. Once selected, select IntPoint in the Action's Properties and click Use. Seeing as this is the first Action, you don't need to change any of the other properties. Do check that the Duration (under Time) is set to 0.

Now add another ActionMoveCamera Action. In its IntPoint property set the second Interpolation Point and a line should appear between the first Point and the second. Under Time->Duration you need to set how long it should take to go from point1 to point2. Make SURE it's set to something other than 0 because otherwise the editor will crash when you preview it. Under Path you might want to change the PathStyle from Linear to Bezier (the line will change to a curve). This will allow you to smooth the flyby by moving the two control-points (those two big white circles) around.

Now you should continue adding new actions until every Interpolation Point you added is covered.

After that is done, you can click the "Open a Preview Window" button. Click "Play Forwards" to view your newly created flyby. If you did it all correctly :)

Now if you want the cutscene to be seen ingame, you'll need to add a trigger which simply triggers the cutscene.

This explains the very basics of Matinee.

Now we'll explain everything in more detail. We'll go over each tab in great details. 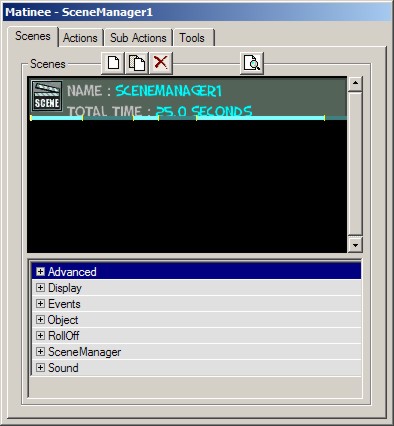 Here you create every scene you'll have in your level.

The buttons allow you to create a new scene, duplicate an existing scene, delete a scene and open a preview window.

New Scene
Create a new blank scene in your level.
Duplicate Scene
Duplicates the selected scene so there is an exact copy of it.
Delete Scene
Delete the select scene from the level. (Note: There is no confirmation for this action, so be carefull not to press this button by accident ;))
Open a Preview Window
Open a new window which allows you to preview your matinee-scenes.

In this tab you can also set some properties for each scene individually. These settings can be found in the SceneManager subsection.

Actions
This allows you the manage all the actions in this scene, but I find it easier to manage the actions trough the Actions-tab.
Affect
Here you have two options

AffectActor
If the Affect-tag is set to AFFECT_Actor, then you can set which actor is affected with this tag. The actor which you want to follow the path must have "bStatic=False"! Also the object/actor seems to lose its collision once it starts moving :(
bCinematicView
When set to true, the screen will be cinematicview, as in widescreen.
bLooping
When set true, the scene will loop. However it seemed to crash the game when I tried it. 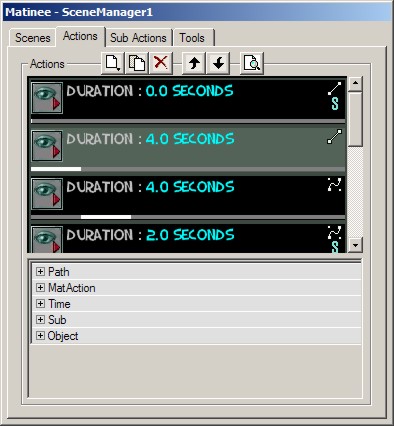 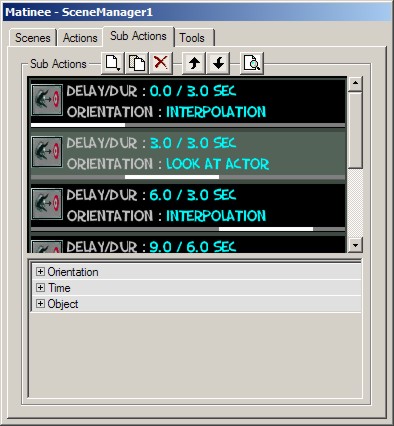 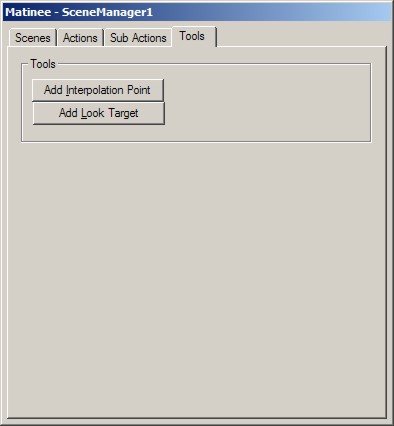 I've found a german tutorial for another matinee-tool: http://unrealed.planet-multiplayer.de/index.php?P=tutorial&D=2-matinee-tool-1 but it's not working at all :(

ProjectX: He he, whenever i add a subaction UED crashes, i think i'm public enemy #1 with the UED Goblin, lol, i have so many crashes. Also, is there a way to set it that the matinee plays when you load the level, cos when i load my level, it just starts at the player starts.

UPDATE- To cause a movie to be played at the start of the level, set the player start's event to the name of the scene.

Foxpaw: As far as I can tell, Matinee is no different in UT2003 than it was in XIIIEd, with the exception of an additional tool button that automatically adds an action for you instead of you having to add one separately after clicking add interpolation point, so the Category:Legacy To Do should maybe just be changed to a Category:Legacy Refactor Me.

Interpolation Points – is that an InterpolationPoint actor? if so, plase link – no, I meant in the actual article above! and don't pipe it – if it's the name of a class, it should appear as it does in script!

MadNad I've heard rumors that someone had this working online??? Any truth to that?

DaveA Define 'this'. Do you mean this: www.unrealroc.com ?